I’ve read and watched endless amount of theories surrounding its identity to the point of exhaustion and no theory left me with a satisfying answer. So I gave up thinking about it… until I had a moment of Epiphany… I realized that no theory has given me a satisfying answer because most of the time, One Piece treasure was something tangible, something only the characters in the story would consider a treasure and something that wouldn’t feel like a treasure to me, the reader. I feel that for One Piece to be a satisfying reward it has to be more than just an object. It has to be something symbolic.

The Literal One Piece

As we approach the end of the story, we are closer to reaching the truth. And now, 1000 chapters in, we have 2 Major clues as to what One Piece is. One of the clues is from Rayleigh and one from Oden’s flashback. 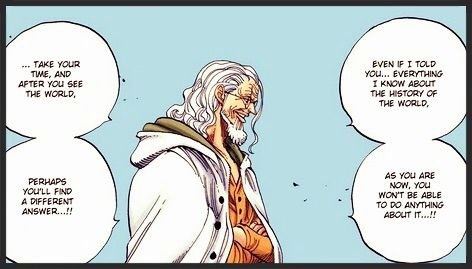 Rayleigh revealed that whatever the One Piece is it explains the true history of the World. Roger Pirates learned about the meaning of D., Void Century, Poneglyphs, Devil Fruits, Ancient Weapons all of it. Lastly, Rayleigh revealed the most important detail that once the Straw Hats find the treasure they might not come to the same conclusion as Roger Pirates did.

Second Clue: When we saw Roger reach the last Island and find One Piece we learned that…he laughed …and because of this he named that Island “Laugh Tale”.

These two clues, to me, seem to indicate that “One Piece” is a Poneglyph containing the tale of the real history of the world, the Tale of Joy boy.

The Figurative One Piece

Figuring out that One Piece is Poneglyph this late into the story is not anything new or groundbreaking. After all, we know that’s exactly what they are used for and the best way to tell the story of Void Century as a losing side is to write it on an indestructible surface. As we know, The World Government is prone to censorship and “Book Burning” as shown to us by the Ohara incident. 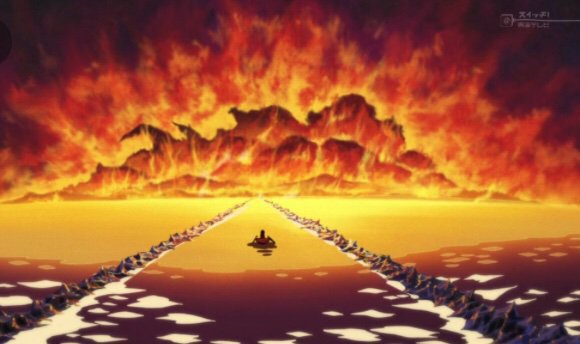 Being the victor in this War that happened centuries ago, The World Government now has all the power. They can destroy books, censor people, cleanse their existence and spread lies about them. They can write the truth to be whatever they wish for it to be because “History is written by the Victors”.

As Napoleon once said, “What is history, but a fable agreed upon?”

The History is whatever the winner wants it to be, a fable written by them. Anything else that is written or taught that goes against their fable is destroyed and burned. Only way to tell the tale of the true History is by engraving it on an indestructible surface that can never be destroyed or burned, in a coded language that cannot easily be deciphered and spread them across the globe.

What is this tale about? We know that once One Piece is found the Greatest War that will turn the World upside down will happen. This story needs to be so effective that it would make Luffy want to actively overthrow the World Government.

Think about it, throughout the story we can see Luffy overthrowing oppressors, dictators and the bullies of the World. Alabasta, Skypiea, Fishman Island, Dresrossa, Zou and currently Wano, Luffy continuously overthrows oppressors and brings Joy to the people he sets free. But Luffy is a pirate, not a hero. He saves these Kingdoms because he always has personal connection and friendship with someone from that Kingdom that he respects and is willing to go to war for.

That’s why Luffy was lukewarm on saving Wano until Momo earned Luffy’s respect. Everyone around Momo has earned it by showing their determination except Momo. And not until Momo showed his own determination to save Wano did Luffy himself expressed his wish to save it. He always wanted to beat Kaido but saving Wano was always in the back of his mind.

It’s no coincidence that in Wano, we got Roger flashback about the Laugh Tale while also getting Luffy listening to the tale of Oden, something we almost never get to see Luffy do. How many back-stories of his crewmembers does Luffy know? How many times has Luffy listened to a story like this? The answer is “not many”, so why now?

The Allegorical One Piece

If we assume this to be true then we “know” One Piece is a Poneglyph which contains the tale of Joy Boy and the oppression by the hands of World Government (or whatever it was called before) but what does the name, “One Piece”, stand for?

It has double meaning.

Have you ever thought why it’s called “Laugh Tale” and not “Laugh Story” or “Story of Laughter”?

“A tale describes a problem and the attempt to solve it, ultimately leading to success or failure in the attempt. In contrast, a story makes the argument that out of all the approaches that might be tried, the Main Character’s approach uniquely leads to success or failure. Tales are useful in showing that a particular approach is or is not a good one. Stories are useful in promoting that a particular approach is the only good one or the only bad one”

Have you ever thought about the name of the Manga? Why is it named One Piece after the treasure instead of Luffy or just Pirate King?

Why introduce these important objects if they don’t tie in with One Piece, and the fact that Road Poneglyps, the 4 Poneglyps needed to find One Piece, have been introduced further support this. This cannot be all there is to them. The purpose of Robin cannot be to simply navigate Luffy by reading the 4 Road Poneglyps. Navigating is Nami’s job. There has to be more to it.

Have you ever thought how weird it would be for the Manga named One Piece not ending with the protagonist’s goal of finding the said treasure but instead end it after it is already found?

In Naruto, the titular character’s goal is to become Hokage, which he realistically **already achieves after defeating Pain (**Hundreds of chapters before the end of the manga), as his wish to be Hokage stemmed from his want to be appreciated by the people of his village, which by this time he fully was. The previous Hokage was out of the commission and there was no reason for him not to become one, but the author chose to delay this.

In One Piece, the titular treasure will be found before the “Final Conflict” but as I explained that will not be the full treasure that will be just one piece of it. After Luffy reads the “Laugh Tale” he sails to take the World Government down and start the Greatest War. After World Government is no more and Celestial Dragons are dealt with, Luffy will continue to sail with his crew, collecting the (One) pieces of the Story left (Poneglyphs), visiting different places, old and new, and ending their journey and the Manga as a whole by uniting the tales Poneglyphs tell into One Piece.

One Piece is essentially a Puzzle. The puzzle pieces are the Poneglyphs, each representing (one) piece of the puzzle and each telling a different tale that when united in One Piece, hence the double meaning behind the name, tell the tale of the true History of the World. It also metaphorically represents the viewers collecting weekly chapters of One Piece that when united tell the whole story of manga One Piece.

One Piece | Kaido Is Working With the World Government?

One Piece | The Connection Between Zunesha and Wano

Who Do You Consider To Have Won The Marineford War?