As we all know, the first time Whitebeard was introduced, he had another nickname “Whitebeard, the closest man to One Piece”. When the Whole Cake Island arc ended, Morgans created a new nickname for Luffy “The Fifth Emperor”. I mean, it’s not impossible for a person to have two nicknames or even three nicknames (like Whitebeard also had for “the strongest man in the world”).

Everyone suspects that Apoo will come out of the war unscathed, go to Morgans and tell everything that happened. And what would Morgans, a guy who lives for hype and selling newspapers, want to do? Greatly increase the hype over Luffy.

Apoo will probably know, somehow, that the Straw Hats will have 3 of the 4 Red Poneglyphs. Thus, when Morgan finds out about this, Luffy’s next nickname won’t be Fifth Emperor, World’s Strongest Man, or anything like that. It can be “the closest man to One Piece”.

The navy seeing this won’t let it go, especially with CP0’s talk about what is happening around the world. Probably, revolutions and revolts will be taking place all over the world. The navy, then, will have a single goal now.

Who is the most dangerous man in the world, right now? He has direct relations with the revolutionaries, with rebel kingdoms (Alabasta and Dressrosa that will surely ally with Luffy in the war) and who have defeated two emperors along with other pirates? It’s Luffy.

Not to mention that Luffy has friendly relations with two other emperors (or an emperor and an ex emperor) who are Shanks and Whitebeard. Marco will probably even gather what’s left of their crew and team up with Luffy.

After Wano, Luffy would be closer to being called the King of Pirates than a “mere yonkou”. 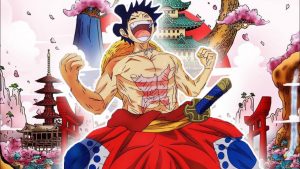 This goes straight to Oda’s lines about what will happen after Wano. When Wano runs out, the end of the One Piece will be near. The navy will see the danger Luffy has, not just as a mere pirate, but as a person almost as dangerous as Roger was.

The great war will start at this moment, not before or after, but the moment the World Government (and the Morgans) discover that Luffy is the closest man to the One Piece.

One Piece | The Symbol of Shimotsuki Clan