People think Luffy won’t fight Shanks because they are friends, other people say Shanks will turn Evil and go against Luffy. I say both are kinda wrong, I think Shanks is the protector of Laugh Tale as he seems to be inspired of Tyr, the God of Justice (Red hair, one arm(lost it to a Beast), swordsman). 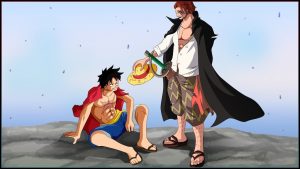 I think Shanks and Luffy should/will fight in a duel. They won’t try too hard to take each other down. Shanks will put Luffy to the test to see if he really surpassed him as Luffy said he would do when he was a kid.

I think the reason why the Gorosei are cool with him, as Shanks promised to keep that last island save (prob said “I will protect it until I get defeated”), but his secret mission/purpose on the story is, to wait for Joyboy and test his strength, because only Joyboy is able to usher in a new era.

I don’t see the other way to implement an all out Shanks vs Luffy fight and both being cool with it. (Random thought but I think Shanks knew at which year Joyboy will arrive and that’s why he just drink and wait, and another thought: he could’ve said to Kaido back then that Joyboy will fight him in 2 years, just chill and go back).

A serious duel between Shanks and Luffy will happen, but without any malice and bloodthirst. It is only a test for the new Joyboy.

One Piece | The final of Wano – Shanks stops Blackbeard