The biggest clues on what Pluton actually is comes from the Water 7 arc where we find out that it was a ship built by shipwrights at Water 7. And everyone just left it at that and moved on but there was more hints that Oda placed.

Skypiea and Water 7: In these two arcs, we are introduced to Klabautermann or fairy spirits that dwell on loved ships. And we find out that the Going Merry was alive and wanted to sail as far as it could go with the crew. This idea hasn’t been brought back in a big way since and I think it’s a setup for Pluton.

Franky’s backstory: I always thought this was one of the weaker strawhat backstories. When Tom broke his chains to punch Franky for not loving his creations, I thought it was kind of out of the blue. Clearly, Franky takes pride in his work because he keeps making them but Tom got angry that Franky regretted making those ships and didn’t love them. Which seemed like a nitpick to me. And Tom didn’t regret building the Oro Jackson, he liked the Pirate king and crew, so I always saw it as a weak speech.

But when you add in the fact that Tom had Pluton’s blueprints and most likely knew the story of how Pluton was created. I think it makes more sense why a shipwright that he was training not loving his creations would upset him so much. I believe that the shipwrights of Water 7 hated building Pluton and this caused the heart (fairy) of the ship to grow dark. In fact if it is true that Pluton was an unloved ship Tom’s speech matches perfectly. He was telling his students to love their creations and defending the existence of Pluton.

The real reason he got mad is because he knows what happens to unloved ships specifically Pluton and the thought of one of his students making the same mistake as the previous shipwrights made him upset. I think Tom feels sad and regret about what happened to Pluton. He blames the shipwrights for wronging Pluton not Pluton itself.

I think we will get a flashback that goes along these lines: The ship is docked in a cave. The ship’s fairy (which has a child’s voice) says “Guys, I want to see the seas. Sail with me.” And the shipwrights who are hiding away from the ship, are extremely scared and angry at it. Bickering amongst themselves like “Don’t get near that thing. I don’t care. It’s a monster. I know we built for war but I regret it. Keep it hidden till we need it. ” And shunning the ship in a dark cave. In the final panel, all we see is a crying child on the ship saying something like “ I just want to feel the sun. We don’t need to destroy anything. Please. Don’t leave me all alone. I’m not a monster. “ If anyone can make people cry over a ship for the second time, it’s Oda. 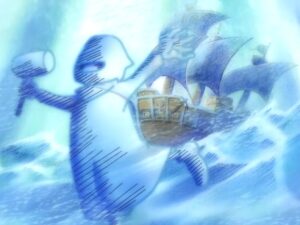 It parallels Going Merry inversely. I even think Usopp is going to be the one to fix the heart of the ship and bring it back. The parallel being that in water 7 no matter how much the crew and especially Usopp loved the ship it couldn’t be saved. No amount of repairs or love could repair Going Merry. But it was loved and died happy. The opposite would be Pluton, the haki covered ship, the indestructible ship that never needs physical repair can only be fixed by love. It lives miserable as opposed to happy.

Now the haki part, we know that objects such as swords can take haki and become permanently a black sword. As far as we understand it so far, it’s not limited to certain types of swords. The manga says any sword can become a black sword because it is dependent on the will of the user. Swords and ships have a lot of similarities in the story. They have a spirit, are made by artisans (blacksmiths or shipwrights), can take on the will or malice of the creators or surroundings (cursed swords and loved ship fairies), and can be imbued with haki (sometimes permanently).

For anyone saying that an entire ship can’t be imbued with haki. First of all, Vergo imbued a bamboo and his entire body with haki, so it’s not limited to finely crafted things. Secondly, Pluton was built by extremely skilled shipwrights, it can easily be argued that they poured their haki into it without even knowing it was haki. Thirdly, what is a sword but a piece of metal, and a ship is a bunch of pieces of metal or wood. (I don’t know where I was going with this but ships totally can be imbued with haki if bamboo can)

The cursed part: It was hated. It’s creators feared it so all the negative energy went into it. It is like an evil version of the loved ship fairy. A ship devil? I think it is like Enma. It couldn’t be loved so it drains the haki and life around it to sustain itself. Maybe that’s why it’s probably underneath Alabasta. It was sucking the life of the flora for 600 years and caused it to turn it into a desert.

There you have it an unloved cursed haki black ship. Pluton, the ship of death.

One Piece Chapter 994 | My other name is Yamato

One Piece Chapter 962 Spoilers _ Daimyo and the Vassals

One Piece Live-Action Series Update | Matt Owens Is The Writer