Hey guys! I got the idea of making a post based on bounties linked to Goroawase (Japanese wordplay). I will try to guess some part in the Straw Hats final bounties. Let’s start!

Firstly, we will look at some bounties where this wordplay is already there.

Alright you got it, let’s start with the potential final SH’s bounties ! 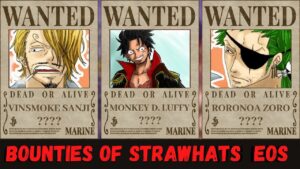 Chopper : This one is special. I think we can use roman numeral here too. Because of the “X” on his hat, and the fact his blood group is “X” too. He seems related to this letter, and this is “10” in roman numeral. Also, in goroawase, 1-10 could mean “Hi-to” and his Devil Fruit is the Hito Hito No Mi. I think his final bounty will contain “110” then. Could even be 110 if we keep the running gag about him. Or something like 11.000.000 if Oda decides to give him a bit more credit, and to keep the goroawase starting at the “10th million number”. His true strength would be a much higher bounty tho. Note that “1” could mean “Hito” too and maybe that will be what Oda will use but only one number would be hard to notice, unless he decreases the bounty to 1!

Jinbe : We’re getting into the big fishes ! Here is hard to guess but 480 can mean “Jinbe”. So that could be in his final bounty even if it’s the one I’m not so sure because it don’t match other things or his birthday (4/2). Btw in french “April Fool’s” is said “April’s fish”, so 4/2 could mean the new day after that 4/1 and Jinbe participating in the new future of Fishmens with all the SH, not so sure about that one too haha but Goda could really do something like this ! Let’s keep the “480” for this one and why not a bounty of 1.048.000.000 for our Knight of the Sea.

One Piece | Shanks broke his promise to Roger?

The meaning of Luffy’s straw hat | Connecting with Joy Boy

God Valley – Where The Lunarians Were Imprisoned