Volume 95 is titled “Oden’s Adventure”. Thanks to Megathread and Calmdownrelax, we had the translations for the leaked images from Volume 95 SBS. You guys can check it below.

D: Hello Oda-sensei. I know it’s a lot but could you tell us the best flower and animal that represents each of the Worst Generation?

O: Coming right up. I don’t know very much about flowers, so don’t look too deeply into my choices in the language of flowers! 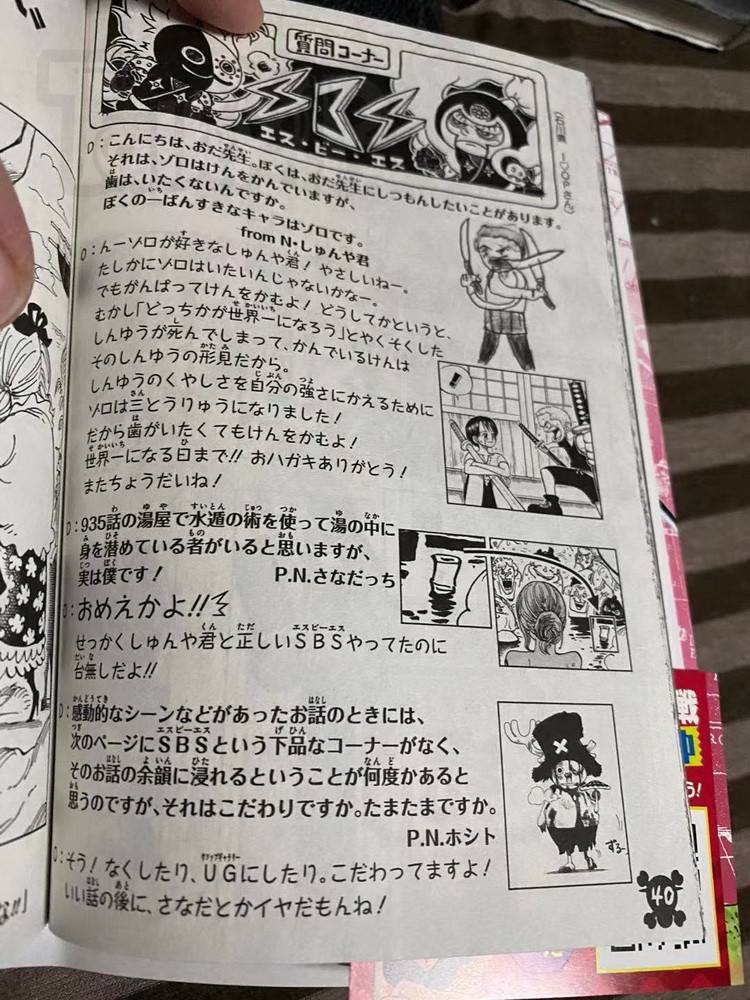 D: Hello Oda-sensei. I have something I want to ask you. With Zoro always biting his swords, don’t his teeth hurt? My favourite character is Zoro. P.N. from N. Shinya Kun

O: Hello Zoro-loving Shinya-Kun! That’s so nice of you to say. It’s true that his teeth hurt, but he still does his best and keeps biting his sword! The reason why is long ago he made the promise to be [The World’s Greatest] to someone who died and the sword that he bites was a keepsake from her. That’s why no matter how much his teeth hurt he will keep biting! Until the day he becomes the greatest in the world!! Thank you for your postcard! I eagerly await the next one!

D: In Chapter 935, you can see somebody hidden in the bath. The truth is, this was me using my Suiton no Jutsu! P.N. Sanadacchi.

O: It was you!! I wanted to show Shunya-Kun a prim and proper SBS but you’ve gone and ruined it!!

D: Whenever there is a chapter with a very moving scene, I notice that the SBS Corner on the next page never has any vulgar content on it. I think there are lots of chapters with scenes that immerse me in a lasting memory so I was wondering is this intentional or just a coincidence? P.N. Hoshito.

O: You’re right! Whenever there are scenes when characters cry or if there is UG (can’t make out the kana) Sanada and his ilk aren’t welcome on the SBS after those chapters! I’m very particular about this!

D: Oda-sensei, I really want to see the human form of Mihawk’s cross shaped black blade [Yoru (Night)]. Until now, all the ones you have drawn were completely uncool! So, this time please crank the coolness of this human form as much as you possibly can when you draw them! As much as you can! You’ll do it for sure!! P.S. By the way, I imagined his two swords as a cool onee-san and loli-chan.

O: Ah, you’re good! I mean the other drawings were fine too right? However, because you made your explanation so concrete, it made it easy to understand. Ladies are great too! Roger that!! Can’t read the text of the cool version Derpy version:

The human versions are complete!! My drawing doesn’t quite have the maturity of a pro but this is the official version!

D: Oda-sensei, I was just recognized in the Guinness World Records as having the largest collection of One Piece goods at 5656 items!! Hooray!! Buying those goods continuously for 18 years was not a mistake. P.N. Sanadacchi

O: Wow Guinness!? Congratulations!! What!? Sanada!!? I have such mixed feelings about this situation!! This is a lie right!? Is this real?? While searching the internet: It seems that this is real. Also, Sanada, you’re a Youtuber! Ah, probably best not to go to his channel everyone! It’s the Youtube of a perverted man after all. Even still, it’s nice to know somebody out there loves ONE PIECE this much, even if he is a pervert. This world truly is amazing! All jokes aside, congratulations! Even if you are a pervert. And thank you! Even if you are a pervert.

D: Can you tell us the name of the frog that sits on top of Usopp’s head as well as how they met? P.N. Macchi and Takshi.

O: His name is Gama-pyonnosuke. Usopp happened to be passing by one day while he was staring down a dangerous snake, so he jumped on Usopp’s head as a ride away from the situation. Usopp is scared of snakes so he ferociously dashed away. Pyonnosuke realized afterwards that staying with Usopp seemed like a safe option, so he just never got off.

D: Revolutionary Army East Commander Belo Betty look is so beautiful, and I really like her! Is she modeled on Marianne from the painting [Liberty Leading the People] by Eugene Delacrois? P.N.Yuito.

O: That’s right. That famous tour guide-like painting! It was from that image that Betty was born! She sure is popular.

D: Odacchi, I have a question!! I know that Den Den Mushi take on the same appearance as their owner but I want to know more about how they work. There are moments where they look like the person on the other side of the phone and there are even moments where they start off looking like their owner then change to look like the person that the owner is talking to! There are still many mysteries with Den Den Mushi! P.N. Omame

O: Yes. First off! Den Den Mushi have the power of mimicry. It can copy the appearance and distinguishing features of anybody nearby. Second, if someone else is on the other side of the line, the Den Den Mushi can also catch their facial expressions while they talk and can reproduce them. What they choose to reproduce and appear as is entirely dependent on the mood of each individual Den Den Mushi. They aren’t machines, they’re living creatures so there aren’t any hard and fast rules for how they transform.

D: Odacchi, hello! In Chapter 929, the people that bought the map of the residence were all beings that appeared in Rakugo right?

This scene was paying homage to the speech [Sashimi is limited to tuna] and [The Senma of Bonin White Eyes] right? I get the impression that Odacchi really likes Rakugo. P.N. Unagi no Taiko.

O: Exactly right! There really are tons of Rakugo references packed all over the place! Only insiders can smile when they see them though!

D: Did you ever use those apps that make your face look younger? Well for Odacchi, even if you use it now it would be okay. If my favourite characters Mihawk, Crocodile, and Doflamingo used this app, what kind of baby faces would come out in the photo?

O: I think I’m okay without the app, so I’ll pass. I love new apps though! Yup, that’s what they would look like as brats.

D: Odacchi! Why did Kid and Killer not just take a break when they were stuck underwater and couldn’t breathe? P.N. 420 Land.

O: Certainly! If they could take a break then they wouldn’t die in that situation. By the way, it seems that you’re a pretty big fan of the Kid Pirate Crew!

D: Odacchi, hello! I have something I’m curious about. Everybody in One Piece says things like [I don’t know (Shiranai → Shiranee)] or [I don’t need it (iranai → iranee)]. Why do you use the Katakana “E” ? Does this carry some kind of personal meaning for you? Please let us know! P.N. Kanamaru.

O: This is a simple one! There is a manga out there called [AKIRA]. They made an anime movie out of it and even now there are fans all over the world, it’s a super famous work. In that manga, they used small letters just like the way I do now. When I was a middle school student, I took heavy influence from this because I thought it was so cool that the characters had a special trait when speaking!

D: Doflamingo kind of gives off the same feeling as Spiderman. Is this just me?

O: I understand. However, Spiderman has only recently become popular in Japan, at least that’s my impression. The look of Doflamingo’s eyes is actually based on a look that was popular when I was in Kindergarten. I found an old picture I drew from those days of [Kamen Rider Super 1], and I think that is probably where I got my inspiration. I love the look of those eyes!

D: In the flashback in Volume 94 Chapter 943, the people of Okobare town are eating SMILES and saying [What delicious apples!!]. Is the deliciousness of these SMILE different than that of the real Devil Fruits? P.N. Miketora.

O: It’s been said before that Devil Fruits are disgusting tasting. Somehow, SMILES take on the flavor of normal fruits. However it can also be said that, it’s because of this that the tragedy of [Ebisu Town] could occurred.

D: I love seeing Nami in a kimono, but I’d rather see her without her kimono P.N. Captain Nobuo.

Ha!! Nononono!! That was something Sanada would say! SBS, that’s all our time! See you next volume!

The Next Level of Advanced Armament Haki

Zoro Will Return Enma at the End of Wano Arc