I’ve been thinking a lot lately and some things don’t make sense Vegapunk is said to be a good guy, but there are times he comes off as kind of cold hearted. He says he is a pacifist, but he still makes and carries weapons. 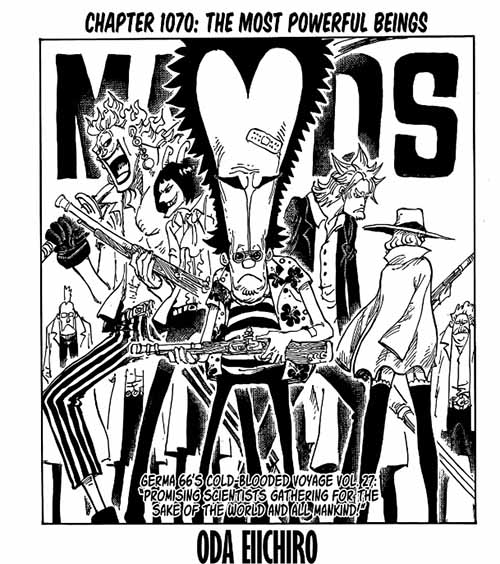 Dragon also says he hates violence, but he also admits he has no other choice and has to take the fight to the Word government as no one else will, so what’s Vegapunk’s excuse?

Now he says things like he wants to help humanity, so his attention is good but the means he gets there might not be, you see actions speak louder than words.

Vegapunk might say he’s doing good but his actions say otherwise, he still builds weapons for the Word government to use and often has weird lines like how he says he wants everyone to connect to his brain and share knowledge with one another, and Jinbei said “I don’t know it sounds good but you also spread wrong information as well that spreads hate”.

Vegapunk: “Oh forget that we shouldn’t concern ourselves with the negatives”.

I see many people saying Vegapunk fired Caesar for wanting to use kids as a test source for the giantifigation experiments. However, when I looked back that isn‘t really what was said.

He didn’t fire Caesar because Caesar was evil, he fired him because he was sick of his behaviour and simply Vegapunk couldn’t hide his science anymore. Caesar must have been constantly doing experiments that were drawing attention and Vegapunk had to hide them and cover up until eventually he just couldn’t anymore.

After all, Vegapunk did experiment on children. Look at King!

King was taken as a kid and brought to Punk Hazard where he was put during tons of endurance tests and chained to machines.

It’s hard to tell how old king was because he’s so damn tall like King today, so who knows what he was like as a kid. He could have been 14 here or 16, but either way he was innocent and a child. And even though other people ran the experiments, it still happened under the roof of Vegapunk. Also, the Seraphim are literally children, he’s literally using child soldiers.

In the recent chapters, he asked Sentomaru to fend off CP0 wole he escaped and Sentomaru showed concern since he is a marine and should side with them, not a pirate and Vegapunk was like “Oh yeah that’s true, guess I will just let them kill me then I mean sure I took you in and fed you and gave you a home, but yeah you don’t have to feel obligated to protect me” Straight up manipulation.

So while he says he wants to help humanity and people speak about him like he’s a noble man the fact is his actions say anything but.

Plus what he did to Kuma.

Dragon is in contact with Vegapunk and they seem to be friends, but I just realised something Dragon wasn’t talking to the main body, he was talking to Shaka.

While he is Vegapunk and has his memories, perhaps he isn’t like the others he’s the one that stopped the fight between Seraphim and the Straw hats, and gave out to the other Vegapunk’s for setting that fight up while they jeered him for wrecking their fun.

Perhaps he has the good parts of Vegapunk and not the bad and is secretly working against him in secret.

I don’t think Vegapunk is trying to help humanity, he’s simply doing it for the advancement of science, therefore his moral compass is a little lacking.

The Connection Between Shanks and Imu, Gorosei Revealed?

The One Who Possesses The Power Of Both Kaido And King

Yamato Will Be The Last Member Added To The Straw Hats

One Piece | The Connection Between Devil Fruits And “Heartbeats”

Luffy Will Tame The Beast Pirates At The End Of Wano

How Was Kaido’s Dream Broken? One Piece Explained