The mysterious devil fruit that the Gorosei are discussing, is probably in possession of the Revolutionary Army. Blackbeard knows about it, and it was sighted during the “Reverie” by the World government. Let me explain.

Let’s start with Chapter 1037. More specifically the panels with the Gorosei talking.

In the first panel, one of the Gorosei is trying to discuss what happened at the “Reverie”, but he is getting shut down by the rest. Then they proceed to, calmly, change the subject toward Wano. But, the blond elder stays quiet and doesn’t participate (and I believe he is the one who got shut down in the first panel). Moving on to the next page. 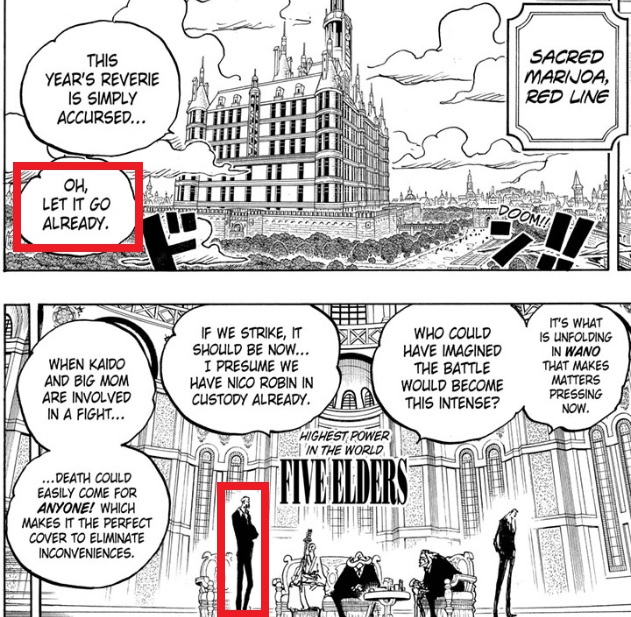 Now, suddenly we are not talking about Wano anymore, and we move completely to a different subject, and everyone seems shaky. What is even more intriguing, is that now, the blond Elder is the one talking and moving the discussion. Which makes me believe that he went back to his original talk of “This year reverie is simply accursed…” which led the fruit to be mentioned. Which makes me believe that a member of the Revolutionaries has it or mentioned it.

Now, there are two more crucial events that hold this theory together and they are the Blackbeard Pirates attacking the Revolutionary army home base, and the reaction of Blackbeard to the news of the “Reverie”.

Let’s first look at Blackbeard attacking the Revolutionary Army, or more specifically the crew reaction to it in Chapter 824. 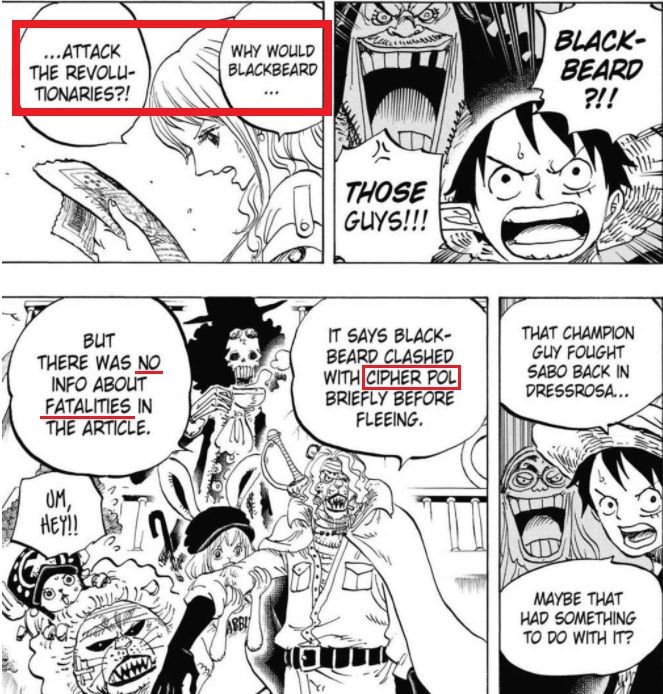 There are two things of notice. Nami questioning why would Blackbeard even try to attack the Revolutionaries. And Blackbeard clashing with Cipher Pol, which ended in no fatalities. This brings the questions of what Blackbeard was looking for by attacking Dragon & co, and what was Cipher Pol doing there? And how did Cipher Pol vs Blackbeard end with 0 fatalities, but was big enough news to make it on the newspaper.

Now, lets take a look at Blackbeard reaction to the Reverie in Chapter 956.

“If they’re going to be picked up by the marines, I’ll just grab ’em first!”. We learn quite a bit from this panel. First, after the “Reverie” the World government is making a move, and this move is not a public execution of Sabo or Vivi (at least not yet), but they are trying to pick up something or someone.

One Piece | Kroom – The True Power of Law’s New Attack

One Piece | Uranus Will Appear In The Next Arc

Vivi Is The Key To Unlock Uranus That IMU Possesses?