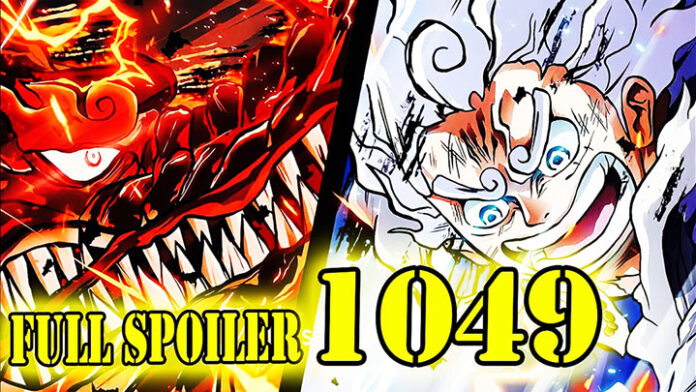 Thanks to Redon From Pirate King Forum

One Piece Chapter 1049 is titled “The world we should aspire to”. The cover of the chapter depicts that someone burned Niji and Yonji’s book.

– Kaidou congratulates Luffy for having come this far in his battle against him. However, he tells Luffy that there is no way he can change the world. 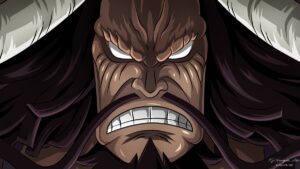 – A new Kaidou flashback begins, this time from his childhood (about 49 years before the present of the story).

– The people of Kaidou’s home kingdom were shocked to see that the strongest soldier in their kingdom was a boy who was only 10 years old. Also, it seems that Kaidou had ambition to go even further.

– Kingdom of Vodka, 46 years before the present of history.

– The kingdom cannot stop participating in wars since they have to earn enough money in them to pay the “Heavenly Gold” to the Tenryuubito. If they don’t, they will lose all the human rights they have.

– Kaidou (who was 13 years old at the time) wonders why they should obey those “Tenryuubito”, people tell him to shut up for fear someone will listen to him.

– In the royal palace we see that Kaidou has been chained and is surrounded by several Marines. The king of the Vodka Kingdom tells him that he has been recruited by them and that now he must serve as a Marine.

– Kaidou refuses to be a “dog” of the Government, the king tells him that he is too great a burden for the kingdom and that they can no longer take care of him.

– One of the Marines tells the king that once Kaidou has been handed over, the Kingdom of Vodka will gain the right to participate in Levely. Kaidou angrily interrupts him saying that it is not a political tool.

– Kaidou escapes from the Navy ship and earns a reward of 70,000,000 Berries (we see his Wanted, which confirms that his name is “Kaidou”).

– During the following years Kaidou was captured by the Navy several times, but he always escaped. Kaidou actually let himself be captured when he was hungry and used the prisoner ships as if they were cafeterias or restaurants.

– 2 years pass (44 years before the present of the story) and the action changes to the Pirate Island “Hachinosu” in the New World. 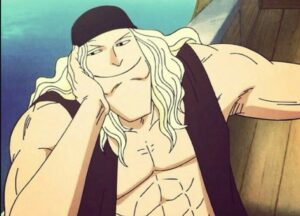 – There Kaidou (who was 15 years old) defeated every pirate who got in front of him. A young Shirohige asks him if he had ever considered becoming a pirate and tells him that “Rocks” has been waiting to meet him.

– Later we see that Kaidou joins the Rocks Pirates and now they are an invincible gang.

– Some time passes and we see that Big Mom tells Kaidou that something important has happened and that they must go immediately to “God Valley” (this occurs more or less 38 years before the present of the story, when Kaidou was about 21 years old ).

– Then we see what happens after the incident of “God Valley”. The “Hachinosu” pirates find out that Rocks’ gang has broken up, but they can’t believe it. They comment that a Marine soldier named Garp is the one who has killed them.

– Other pirates say that there must have been internal conflicts in the gang, since the concept of “teamwork” did not seem to exist in the brains of those monsters.

– We see again a very angry young Big Mom, she is looking for Kaidou. It seems that he has left without showing his face to her.

– 10 years have passed since the “God Valley” incident (28 years before the present of the story, when Kaidou was about 31 years old). Kurozumi Higurashi goes to visit Kaidou at his base. 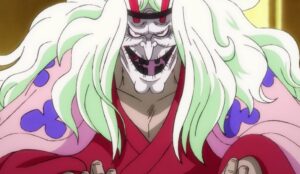 – Higurashi tells Kaidou that he is the “personification of force” and that brute force has been the solution to everything throughout history. After all, humans are “animals” and only the strongest survive. Nature is like that.

Kaidou agrees with his words.

– Higurashi says that the “remnants” of the Rocks gang will enter the scene soon, and that the world will be ruled by weapons. He then tells him that he has a great deal to offer him.

– Again a time lapse passes and we see Kaidou talking to his subordinates in his castle (it seems that this scene takes place after Oden’s death).

Kaidou : “There are people who are born into nobility! And people in power who take peace for granted!

Let’s drag them onto the battlefield! That’s the true meaning of “equality” and “freedom”! Only in “war” can a person’s worth be defined!”

– Kaidou talks to King, tells him that he doesn’t know how it happened, but that Yamato has started to mention Joy Boy’s name. He also tells her that he believes Oden’s wish to “open the border of the country” was a preparation for Joy Boy’s arrival.

Back to the present

We see that the CP0 agent who had survived is moving away from Onigashima using the Geppou (Moon Walk) in the air. 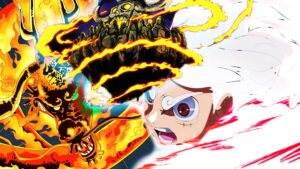 – Momonosuke looks at Luffy and Kaidou’s clash of attacks and says that Luffy will win. Yamato tells him not to dawdle and Momonosuke keeps trying to create the “clouds of flame”.

– The people of the Flower Capital continue to celebrate the festival. Inside the Onigashima castle we see that the water continues to put out the fire and drag everyone down.

– Sanji saves Osome and wonders where the water came from. Franky tells the samurai to be careful not to get swept away by the current.

– Denjiro tells Hiyori that she has done very well, enduring all those years of suffering to get to this moment.

– Kaidou’s “clouds of flames” disappear and the island begins to fall.

– Kaidou’s fire dragon manages to close his mouth little by little and gains ground against Luffy’s attack, which he is suffering.

Kaidou: “Tell me, Straw Hat!! What kind of world would you be able to create?”

– Momonosuke manages to create a giant “cloud of flame” that stops Onigashima from falling and moves the island out of the fighting zone.

– At that moment Luffy recovers ground and manages to go through the fire dragon and hit Kaidou while he answers his question.

Luffy: “I’ll create a world where my friends… They can eat their hearts full of happiness! That’s the world I want!”

– Luffy’s punch makes Kaidou hit the ground at high speed and with great force. The impact is so powerful, that Kaidou is embedded in the ground of Wanokuni very deep.

– At that moment we see the end of the conversation about Joy Boy that Kaidou and King had years ago.

Kaidou: “The type who can defeat ME in the future!!!”

King: “Being like this… I think he’ll never show up”

– On the final page we see that Onigashima has managed to land on the ground of Wanokuni without major damage. Momonosuke falls to the ground exhausted. Luffy is also falling from the sky, exhausted and with his eyes closed.

What exactly is the One Piece? One Piece Theory

One Piece | Sabo And Vivi Will Come To Wano Soon?

One Piece | The Origin of King’s Haki