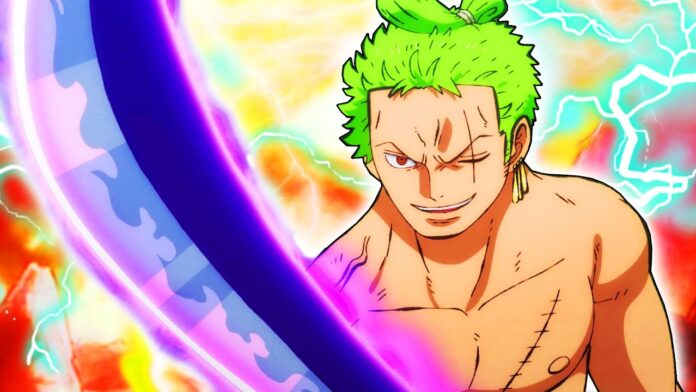 The Chapter begins with Marco in his Phoenix form and Izou. Marco is flying while he carries Izou by the shoulders. Izou felt uneasy after hearing the report about the appearance of a mysterious youkai, so he asked Marco to carry him to find it. As they talk, they fly over by the area where Big Mom is fighting.

Kaidou’s subordinates are trying to leave the castle, but the samurais are blocking the exits to the Live Floor, so they can’t get out. We see that they are bringing cannons to that area.

Cut to the 2nd lower floor of the castle’s basement.

We see that Apoo keeps chasing Yamato, and Drake keeps chasing Apoo. Fuuga is running close to Yamato with a very friendly behaviour (it seems he likes Yamato a lot). We can see that Fuuga is like a centaur, because lower half of Fuuga’s body is a horse body. 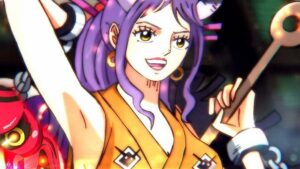 Yamato: “Fuuga! We haven’t seen each other in a long time, but now I’m in a hurry!”

Kaidou’s subordinates report from the 2nd floor of the castle that the giant fire youkai is heading to the basement. Suddenly, someone falls from an upper area of the castle to the area where Yamato is. They are Brook and Robin, who land on Fuuga’s head (Fuuga’s hair cushions them). The 2 members of CP0 also jump down after them.

Brook and Robin prepare to fight. However, the fire youkai appears behind CP0 and both agents are engulfed in flames. The youkai finally reaches the area where Yamato and the rest are while people try to get away from it. Yamato sees the youkai is going through the floor to the lower levels.

Yamato: “If it keeps going down like this…This is not good! The island will explode in the air! Fuuga! I need your help!”

Brook and Robin land to the floor from Fuuga’s head and prepare to leave before the CP0 agents rise from the flames. When the CP0 agents come out of the fire (both are fine) they hear a strange noise. Apoo is before them, he has a Den Den Mushi in his hand and he is taking pictures of CP0.

Apoo: “Apapapapa! “Tenryuubito’s dogs in Kaidou’s castle”! Exclusive! I’m going to sell it to Morgans! The Government, which lost its intermediary Doflamingo, finally…”

The boss of CP0 hits Apoo with “Shigan”, Apoo falls to the ground while blood comes out of his mouth. Drake arrives.

Drake: “Then why don’t you try giving me excuses!?”

Drake: “So you were alive.”

Apoo: “I used Color of Arms Haki to lessen the damage. If they want to pick a fight, I’ll give it to them!”

Drake: “You are the one who started this…”

While Apoo and Drake are arguing, CP0 boss gets up. Just at that moment Drake (transformed into dinosaur form) and Apoo attack both CP0 agents at the same time.

Cut to the outside of Onigashima’s castle.

Zoro and King continue fighting. King is in midair transformed into Pteranodon form. King grabs the crest of his head and begins to pull it backward. Suddenly, his beak falls back into his face, Zoro watches him carefully. 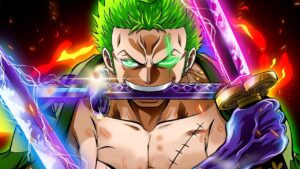 Zoro: “Hah… Hah… Is this some kind of mechanism that is activated by pulling it…!?”

When the beak is 100% inside King’s face, King drops his crest and his head shoots off.

King’s head shoots out like a slingshot, the attack is similar to Luffy’s “Gomu Gomu no Kane” (although the scene is a bit confusing). Zoro hardly dodges it, he says it cannot be defended because it’s like a laser beam.

King: “In ancient times this is how Pteranodons hunt their preys!”

Zoro attacks King with “Sanbyaku Rokujuu Pondo Hou” (360 Pound Cannon), but King easily dodges it and starts shooting at Zoro. As he dodges the shots, Zoro thinks that he can’t continue fighting this way because he will run out of energy before defeating King. Zoro asks a question to King.

Zoro: “That fire on your back is a Pteranodon’s special skill too!?”

Zoro attacks King again but King covers himself with his wings and blocks the attack. Zoro asks him again.

Zoro: “Is that the famous toughness of “dragons” and “dinosaurs”?”

King: “That’s right… But I’m something MORE than that! I’m a little more “special” than others!! ”

King returns to his human form and fights directly against Zoro.

King: “Now let’s play with the swords! I love swords!”

While Zoro is defending, he thinks to himself about situation.

Zoro: “I hit him several times, but there’s no blood at all…! His wings don’t seem decorative… But I can’t be sure that he uses them to “fly”. That flame is still burning on his back. I thought it was something related to his “ability”, but it’s something different. Is he a fish-man? Or has he giant blood? Or is he from an unknown race? If I can’t find out this guy’s SECRET… I feel like I won’t be able to win!”

As Zoro thinks about all this, King attacks him with a powerful blow. Zoro blocks it, but he’s thrown at some rocks, the impact is very strong. Zoro falls to the ground, he is very tired. Suddenly, Zoro hears something. 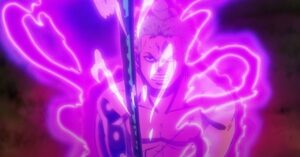 Suddenly, Enma becomes out of control and starts sucking Zoro’s Haki from his arm (like the first time he used it).

Cut to the treasure room of Onigashima’s castle.

Orochi is there. While he’s waiting for Fukurokuju, Orochi hears something.

Orochi: “Hmm? Is a Shamisen playing…? This is stupid… Who idiot would start playing in the middle of the battlefield…? Is it coming from the next room…? ”

Orochi gets up and opens very slowly the door of the room where the sound is coming from.

We see Komurasaki in front of him, she is sitting there playing the shamisen. Orochi is shocked.

Orochi: “Not a day goes by that I didn’t dream of you…! I can’t make myself forget you…”

Komurasaki: “It’s the same for me! I will be always be by your side.”

NO BREAK NEXT WEEK

One Piece | The Reason Why Momonosuke Can’t Afford To Die

King the Wildfire | The Truth Is Revealed

What will happen after Wano? Where is the Road Poneglyph?