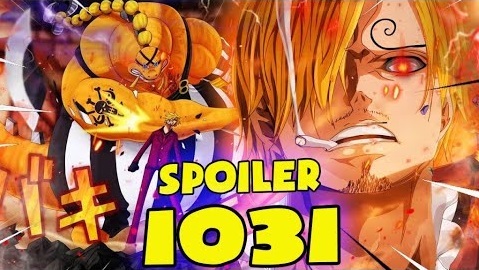 Chapter 1031 starts where the previous one left off. Kaidou’s subordinates can’t believe Big Mom has been attacked like that. Law and Kid are exhausted and panting.

Law is surprised to see the “awakened” power of Kid’s Jiki Jiki no Mi and how he is able to give others magnetic power. Law asks Kid how powerful his magnetic force is, but Kid replies that he won’t reveal all of his cards to him.

Suddenly, a steel beam shoots out of the area where Big Mom is buried and falls on Kaidou’s subordinates. Big Mom rises up from the rubble, she’s in rage.

Big Mom uses “Soul Pocus” attack to pull out lifespan of every Kaidou’s subordinates around her. Then Big Mom gives that lifespan to all metal pieces on the ground to transform them in Homies.

Then Big Mom pulls out 1 year of her own lifespan and eats it to gain more power. Since she is too powerful, Big Mom can only become stronger by consuming her own lifespan. Big Mom and her Homies get bigger and Big Mom’s eyes burst into flame.

Big Mom: “I haven’t felt this much pain in decades… I admit you are strong…!”

Big Mom: Trafalgar Law…! Eustass Kid! Straw Hat Luffy is like you too, you have definitely come for this THRONE… Take it if you can! The Yonkou’s throne!”

Law: “There’s no chance of learning history… if I don’t defeat this monster first.”

Kid: “Don’t hold back! We will drag her down from her throne no matter what it takes!”

While this happens, we see that Yamato continues on her way. As the route she wants to follow is full of enemies, she prefers to go to the basement through the “Cave Chamber”.

Cut now to the “Cave Chamber”, where Drake and Scratchmen Apoo are.

Drake attacks Apoo, but Apoo attacks him too. Drake blocks the attack, saying that Apoo’s attacks are actually defendable.

Drake: “I’m going to finish you off to fulfill the promise I made to “Straw Hat”. It’s easy to know where your attacks are going. You need people to “hear” your attacks to activate them, but your “line of sight” indicates where you are going to attack!”

Suddenly, Yamato barges into the room smashing the door.

Yamato: “Ah! Drake…! Apoo! Why is here someone from “Tobiroppo”?

Yamato tells Apoo that she doesn’t have time to listen to him. Then she attacks Drake telling him to get out of his way. Drake explains that they are on the same side now.

Yamato: “Really? Sorry, but I’m in a big hurry Drake! “Onigashima” and the “Flower Capital” are in danger!”

The Number “Fuga” smashes a wall and starts chasing Yamato. Apoo orders the other two Numbers to accompany him to go after Yamato. Drake runs after them.

Cut to the 2nd floor of Onigashima’s castle.

The two CP0 agents have arrived to the place where Robin and Brook are. Minks fight them while they ask Robin and Brook to escape. Brook carries Robin in his arms and flies.

Robin explains that the agents who wear masks are considered special even among the CP0. We see that the chief of CP0 is looking at Robin and Brook, then he uses something like “Soru” to chase after them.

Cut to Sanji, who is in Black Maria’s “brothel”.

We see that the women who are there yell angrily at Sanji, some point him with swords and spears. One of them holds a girl in her arms who is hurt and scared. The woman asks Sanji why he has hurt her, Sanji is confused and says that he hasn’t done anything.

The women start throwing things at Sanji, who backs up and leaves the room where he was. Sanji is confused and frustrated. 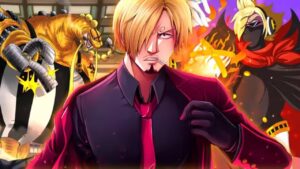 When Sanji was running away, he met a woman in the brothel.

Suddenly we see that Sanji’s expression changed to a serious one, and then we see the geisha is lying on the ground and injured. When the geisha got up she looked at Sanji in terror.

Back to the present.

Queen has transformed into his hybrid form, Sanji is mentally shattered.

Sanji: “Luffy, what kind of me would you prefer? The old me who is useless when the enemy is a woman… Or a cold-blooded “Science Warrior” who can hurt anyone as you wish!! Which one would be more useful for the “Pirate King”…? ”

Sanji: “I’ve finally cleared my mind… The Raid Suit triggered the awakening of “science power” in my body…!! And things cannot be changed!!! But… I will never become “Germa”!!!”

Sanji throws his Raid Suit device to the ground and stomps it with his foot. The suit explodes. Queen is shocked to see that Sanji is wasting his own power-up.

Sanji lights a cigar and pulls out a Den Den Mushi. 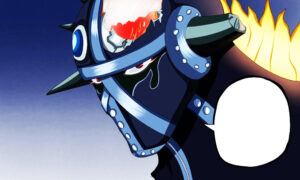 Sanji: “I was the one who put it in your clothes, in case you wander off somewhere…”

We see that King has transformed into dinosaur form and is shooting Zoro from the air.

Sanji: “Listen to me, I will be brief. I have one favor to ask you. After this, we will win against the Beast Pirates.”

King attacks Zoro with his beak, but Zoro stops it with 2 swords.

Sanji: “But if after the battle… my “mind” is not the same as before, I want you to kill me. ”

Zoro: “Huh? Hah… Hah … OK I will do it!! I don’t know what happens… But that’s one more thing for me to look forward to after this battle!! So… Don’t you dare die until then.”

The call between Sanji and Zoro ended. Suddenly, Sanji disappears in front of Queen.

Queen: “He has disappeared!? Is this also part of science!? JUDGE’S SON!”

Sanji appears covered in flames in front of Queen. Then he kicks Queen.

How strong was Oden, who left a scar on Kaido?