One Piece Chapter 1023 is just around the corner, the chapter will continuously feature a series of fights as the Wano war gets pretty intense every new installment coming. According to official sources, the upcoming chapter will focus on the fight between Zoro, Sanji and King, Queen.

– King and Queen are fine after Zoro and Sanji’s attack.

– Marco remembers what Whitebeard told him (“It seems that there is a land of gods on the Red Line”).

– We will see the fight between Zoro, Sanji and King, Queen.

– Sanji tells Zoro that his body feels strange after using the Raid Suit for the 2nd time.

– Queen taunts Sanji for being a Germa cyborg.

– Queen tells him if those fire legs are a machine, but Sanji tells him that he is 100% human.

– Queen wonders if a normal human can create fire and tells him that if he is not from the X tribe. However, Sanji’s Diable Jambe is nothing compared to the powers of King’s race. 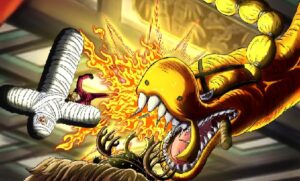 – After this, they focus on King, implying that Queen speaks of King’s race.

Hyogoro and Kawamatsu talk about Zoro while they see him fighting with King. They say he reminds them a lot of Ringo’s lord, Shimotsuki Ushimaru. And also the legendary samurai Shimotsuki Ryuma.

According to them, Zoro’s swordsmanship and one eyed look is similar to Ryuma’s

Momonosuke has become an adult, he is now 28 years old. We see that he is transformed into a dragon in front of Luffy.

NO BREAK NEXT WEEK!

One Piece | The Connection Between Elbaf and Red Line

Admiral Sakazuki Will Be Redeemed By The End of One Piece

Knights of God – Who are they? One Piece 1054 Spoilers

One Piece | Kroom – The True Power of Law’s New Attack