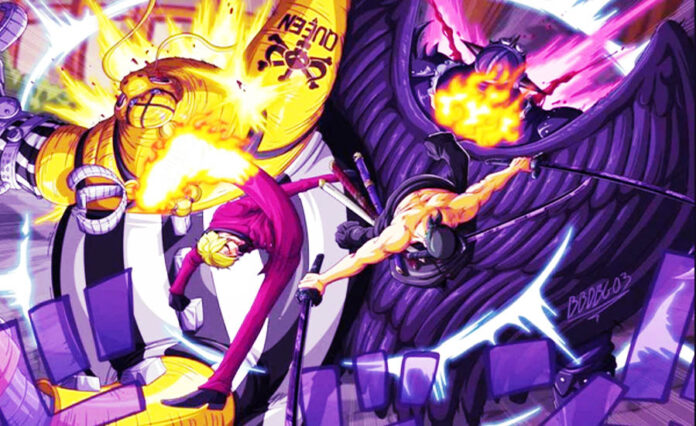 The chapter starts where the previous one ended. Zoro and Sanji are standing in front of King and Queen, who are lying on the ground covered in a cloud of dust (both of them are conscious). Chopper is surprised to see the effect of the Mink’s medicine, the subordinates of the Beast Pirates are also surprised to see Queen and King fall.

One of the Beast Pirates’ subordinates points his gun at Zoro, but just before shooting him, Kawamatsu defeats him. Hyougorou tells everyone not to interfere with Sanji and Zoro’s fight and to try to make no one from the other side do it.

Marco looks at King and Queen as they get up, and remembers a few words that Whiteheard said to him.

Whitebeard: “Long time ago, before the time of Mary Geoise, there was a “country of god” above the Red Line.”

Queen and King return to battle, then Queen raps.

Then Queen fires some laser beam at Sanji and Zoro, but they dodge them. Zoro realizes that something is wrong with Sanji.

Sanji: “After wearing the Raid Suit 2 times I feel my body is…”

Zoro: “With your eyebrows?”

As they speak, King lunges at Sanji with his sword, but Zoro stops him with his swords. Queen takes the opportunity and tries to attack Zoro with a new technique called “Bridal Grapper”, with which he turns the claw of his ponytail into a flaming claw. However Sanji steps in and blocks Queen’s claw with a flaming kick. Queen laughs.

Queen: “You must be one of Germa’s “cyborgs”!! All of Judge children are “cyborgs”… Those legs are mechanical and can burn if you want it, right!?”

Queen: “Ehhh!? Humans can create fire now!? It’s not like you’re from “Lunaria race” or something!!!”

After saying that name we cut to King’s face, he’s listening to the conversation in silence. Sanji begins to spin flaming kicks at Queen as he defends himself with his arm with Busoshoku Haki and his claws. Queen ends by saying that it doesn’t matter what Sanji is, since he is facing a cyborg that even Vegapunk cannot create.

Zoro and King keep fighting. Suddenly, the edge of King’s sword changes shape into something like a comb and King takes the 2 Zoro’s swords from his hands. Then King pulls on his sword and snatches the 2 swords from Zoro, throwing them aside. Then King throws a powerful punch at Zoro’s face. It seems that the blow has hit Zoro’s face but he has managed to move his head in time and he has stopped the blow with the sword that he holds in his mouth.

Zoro: “Your battle style is curious…!!”

King: “There’s no need for fixed form and style in real battle.”

Zoro: “You’re right. Now I think about it, you never said you are a swordman…”

Zoro picks up the 2 swords that he had lost and returns to the fight.

Zoro: “If it’s necessary I may need to win this battle biting your neck and tearing your windpipe… Because I can’t lose no matter what!!!”

Hyougorou and Kawamatsu are watching Zoro and King battle. Kawamatsu says that Zoro is a formidable swordsman, Hyougorou says that he reminds him a lot of Ringo’s lord, Shimotsuki Ushimaru, in his younger days. Even his fighting style is similar. They also say that Zoro returning Shusui, the sword of the legendary samurai Shimotsuki Ryuma, to Wanokuni must be fate. As King and Zoro continue fighting, we see an image of Ryuma where we see that his left eye was also damaged like Zoro’s eye (he had a scar in his face too). 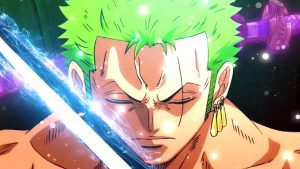 Cut to the 2nd floor of Onigashima castle. Jack and Inuarashi keep fighting, Jack is using his hybrid form. His legs are still mammoth legs but his torso and arms have human form (in fact he is using his swords). His head is a mix of his mammoth and human form, he maintains his large trunk and large fangs but has a smaller head and does not have mammoth ears.

Jack attacks Inuarashi with his trunk but, as happened in Zou, Inuarashi grabs it and throws him out of the room. They both fall into the courtyard where Ashura is unconscious. Inuarashi remembers the torture that Jack put him through on Zou and says that now all will gonna be different. Thanks to the huge hole in the ceiling opened by Kaidou, Inuarashi can transform into his Sulong form.

Cut to the outside of Onigashima castle, just after Nekomamushi’s attack to Perospero. Before Carrot and Wanda’s gaze, Nekomamushi approaches Perospero saying that he is going to avenge Pedro’s death. Once he steps out of the shadows, the moonlight causes Nekomamushi to transform into his Sulong form before Perospero’s frightened gaze.

On the 2nd floor of Onigashima castle, Raizo and Fukurokuju are still fighting. Fukurokuju tells Raizou that Wanokuni cannot trust a child as shogun, Raizou replies that he doesn’t underestimate youth since “people can grow”. 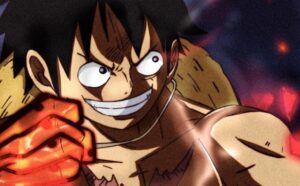 Cut to Wanokuni coast. Heart Pirates are upset, they have drawn their weapons and are pointing at “something” that reminds them a lot to Kaidou. In an amazing double page we see a giant dragon planted in front of Luffy. It’s Momonosuke. Luffy remembers his first meeting with Momonosuke (when Momonosuke told him that he was not a prey).

Momonosuke is now 28 years old, Shinobu has made him grow 20 years with her powers. Shinobu cries aloud as she remembers the moment when she raised Momonosuke. We only see a picture with Shinobu grabbing Momonosuke’s arm, we can’t see Momonosuke entire body. However, we can see that adult Momonosuke is taller than Shinobu (and she has more or less the same size as Luffy) becouse Shinobu’s head in that picture reaches Momonosuke’s elbow.

Luffy and Momonosuke set off.

END OF THE CHAPTER

NO BREAK NEXT WEEK!

One Piece | Who is the final Straw Hats?

Origin of Beast Pirates | Why King and Queen Joined Kaido

Confirmed! Shanks is That Guy | One Piece 1018 Official Spoilers