As we can see that Blackbeard’s devil fruits perfectly do what Haki would do. His Yami Yami no Mi allows him to hit logia types, one of the biggest hurdles in One Piece that usually would require Haki to overcome, and the Gura Gura no Mi fulfills the roles of both Advanced Armament Haki by doing internal damage and Advanced Conqueror’s Haki by extending the attack outward/increasing the power of the punch that.

Blackbeard’s whole thing is that he is cheating and stealing his way to the top, so instead of taking the time and effort to train his Haki, he instead steals powerful devil fruits to add to his arsenal, even getting fruits that fulfill some of the things Haki fulfills. 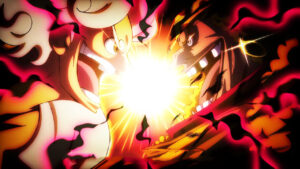 Another thing is that Kaido mentioned in a recent chapter how the thing you need to conqueror the sea is Haki, not a strong devil fruit. So that works as a great parallel with Blackbeard and Luffy because of how Luffy will become Pirate King by working hard and training his Haki and Blackbeard will ultimately lose because he relied on his stolen devil fruit powers to try to get to the top.

The Real Reason Why Mihawk and Crocodile Joined with Buggy

One Piece | Who Will Save Robin And Stop the World Government?

Why Shanks Said It’s Time To CLAIM The One Piece