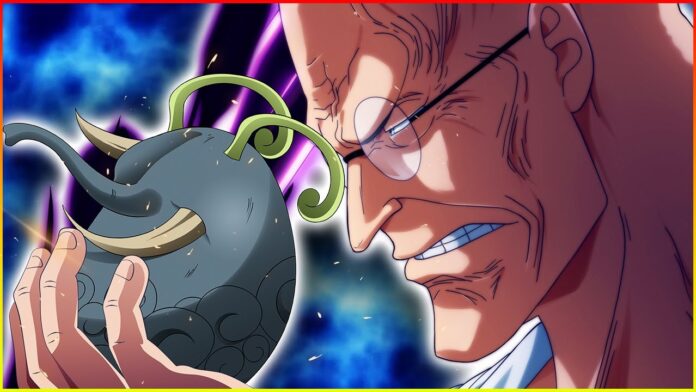 First of all, to dispel a popular idea, that final part of the Gorosei conversation seems almost confirmed to be unrelated to Zunesha. Given that they’re ‘presuming’ that Robin as already been captured, we see that they seemingly don’t have live updates of the situation around Wano or from CP0. They don’t know Zunesha has appeared. They’re talking about something else.

Zunesha is not a devil fruit user.

Zunesha is not a devil fruit user who turns into an elephant. How do I know this? Because Oda already told us that Zunesha’s species is Naitamie-Norida elephant. This is specified in his Vivre Card and in the SBS section of Vol. 83, and is supposed to be a reference to a Dali painting when read backwards. The big chonky boi is an actual elephant.

The Gorosei are NOT talking about Zunesha.

Firstly, the conversation is happening in realtime, as shown in the manga panels shown below. They do not know Zunesha is coming as they received no report of it yet. Moreover, they do not have a Den Den Mushi in front of them either. Hence, they are not aware that Zunesha is approaching Wano and the government ships.

Furthermore, it’s specifically stated that the name of the devil fruit is changed to hide it from the world. Zunesha is never stated to have a fruit, let alone a named devil fruit.

Now, while Zunesha is possibly not common knowledge to the world, Zunesha is no secret. Jack reached Zou and the Strawhats did too. People are aware that Zou and Zunesha exist as there are some famous pirates from Zou already and some of their race are a part of Big Mom’s nation and crew. Thus, it makes no sense to assume that the Gorosei are talking about Zunesha, who only just appears.

Not to mention, Zunesha is not mythical elephant zoan, which is debunked above, or possibly even a devil fruit user at all because far too much of his body is underwater to allow for general movement or anything.

The shadow in front of them.

It’s worth noting that Zunesha is approaching from the rear in the final panel. The shadow in front of them is….IN FRONT OF THEM. In addition to that, I am pretty much aware of the fact that the favorite hobby of One Piece fans is to conceptualize theories. However, just try applying the principle of Occam’s Razor here. The simplest explanation here is that it’s Onigashima.

Now, it is possible the shadow is not Onigashima as Marco did see a shadow previously in the manga in prior chapters. However, the World Government’s ships are just near the coastline now, which can be assumed due to the hills rising out of the water in front of them. So, they are near the coast of Wano, while Onigashima is already flying over the mainland of the nation and nearing the capital.

Although, I could be wrong. But it’s likely that the simplest explanation is the right one here. They are actually looking at Onigashima.

One Piece | Shanks Took The Final Pieces Of The Puzzle

One Piece | How Important Is Gum-Gum Fruit To World Government?

Zoro’s Backstory – The Connection Between Zoro and Wano