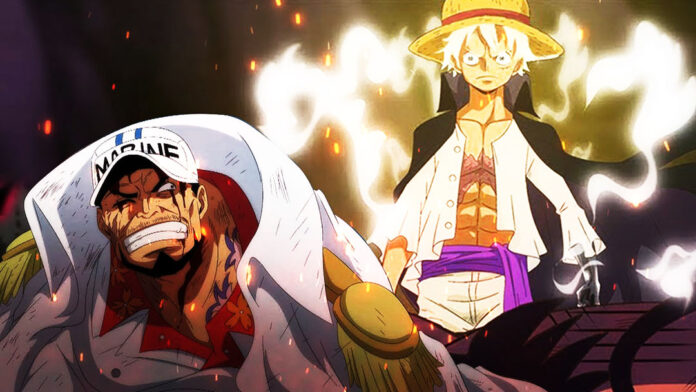 Sakazuki, formerly Akainu, the “Red Dog” of the military. User of the magma-magma fruit, proponent of “Absolute Justice”, and perhaps the most hated character in the series for killing Ace and maiming Luffy. Surely Luffy will someday have his revenge against someone who has done harm to his brother, possibly coinciding with the final war? Maybe… but regardless, Sakazuki will become an ally to the Strawhats, and maintain his position as Fleet Admiral when all is said and done.

I’m going to break this up into four major sections: 1st, a discussion of how vengeance is handled in One Piece; 2nd, an analysis of Sakazuki and his possible motivations; 3rd, some bonus extra-tinfoil super-sized speculation, and finally I’ll bring it all together.

First, let’s talk about the concept of revenge in One Piece. As we can see Nami never wanted to kill Arlong, she just wanted to buy the island from him. Sanji never dreamed of returning to Judge to harm him, he was content to distance himself from the Vinsmokes. Robin doesn’t harbor some massive vendetta toward the World Government for how she was hunted as a child, she just wants to continue to learn and explore. The protagonists don’t focus on revenge – or, when they do, it ends poorly for them, as in the case of Ace hunting down Blackbeard. 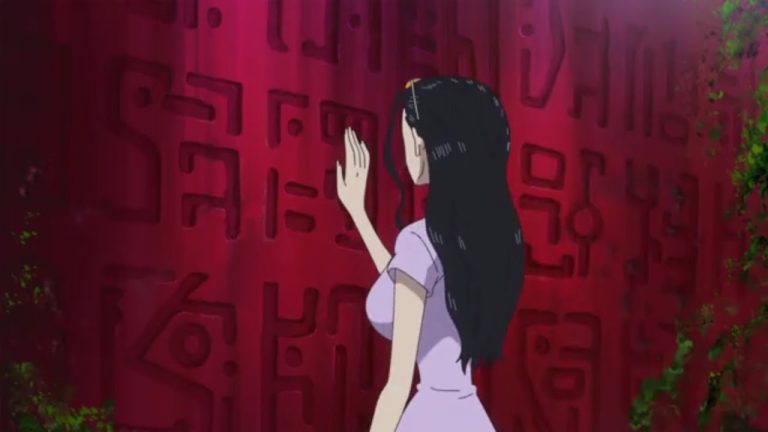 By contrast, antagonists love vengeance. Arlong hates humans and subjugates them, Crocodile attacks Whitebeard at Marineford for some past slight that we don’t yet know the full extent of, Doflamingo wants to tear down the Celestial Dragons and rise to their position, Moria wants to raise an army of shadows to take revenge against Kaido. Revenge is unequivocally shown as a negative motivation.

“But what about when Luffy punches Saint Charlos?” – there are situations where Luffy (and other protagonists) give villains some retribution for their behavior, but the key is that all of these are a response to active subjugation or mistreatment of his friends. If Luffy did not defeat Crocodile, Vivi would forever be under his heel, or killed. If Luffy did not punch Charlos, Camie would have been taken as a slave. If Luffy did not defeat Caesar, the children on Punk Hazard would never have escaped.

Luffy, and the protagonists in general, are by and large unconcerned with revenge, and instead just want to create a better future. I think Luffy’s perspective on that subject will change briefly, but we’ll get into that in part 4.

Second, let’s talk about Sakazuki. He’s still a fairly mysterious character, like the majority of high ranking marine admirals. My analysis of his personality and motivations will be based on very little information, but I think there is still a lot to be discovered. One line that stands out to me is this declaration at Marineford: 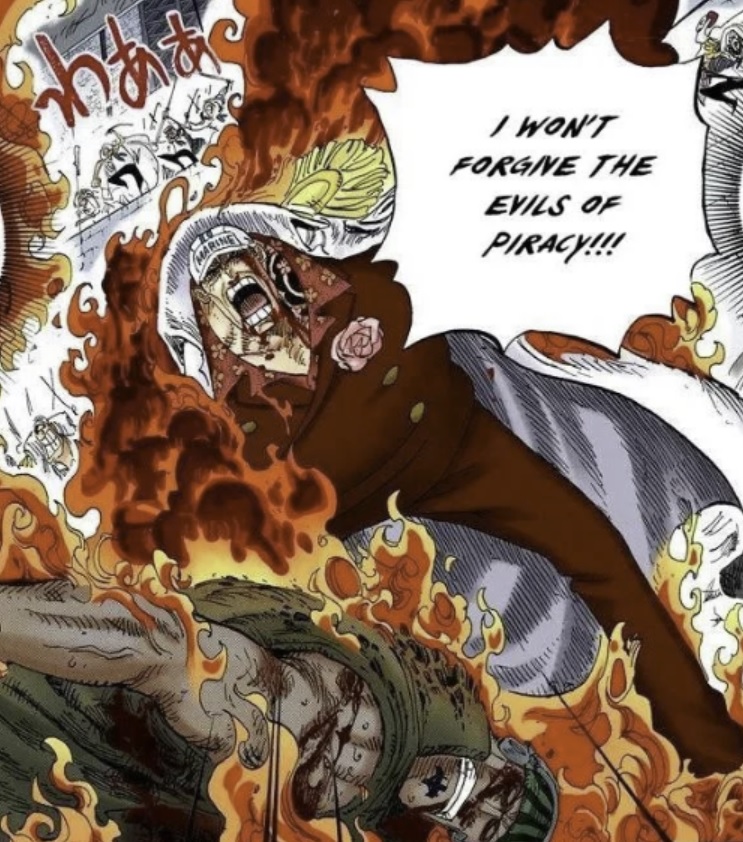 Sakazuki uses the word “forgive” here – perhaps this is a quirk of translation, but to me that sounds like he’s been personally slighted by pirates. Like he has some vendetta against them and their way of life. But Sakazuki doesn’t just blindly follow orders, either – he expresses dissatisfaction with the decisions of the Gorosei after Dressrosa: 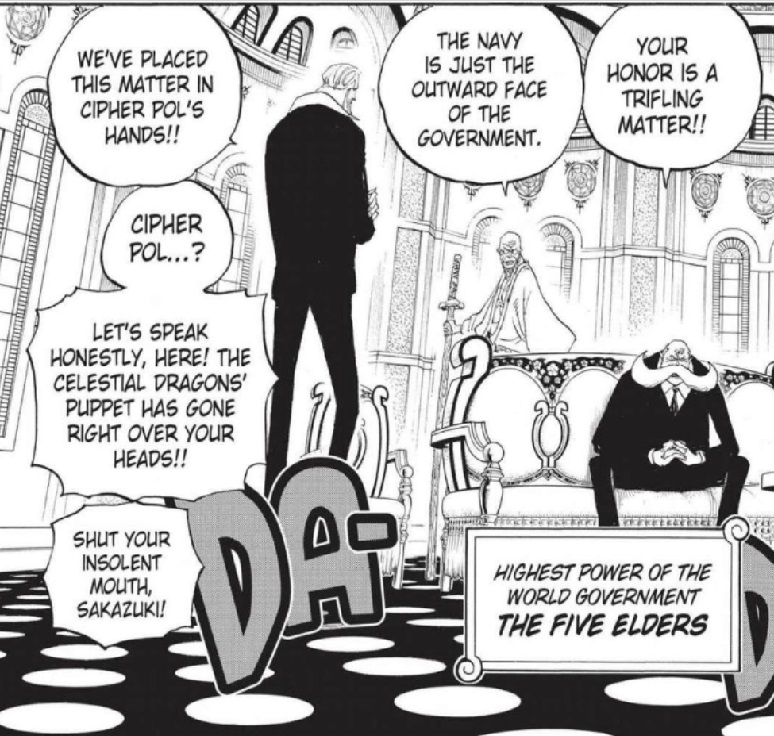 He clearly still has thoughts and opinions of his own about how things ought to be run, including harsher retribution for the rogue Shichibukai, Doflamingo. I think another important part of this panel is the last line – “Shut your insolent mouth, Sakazuki!” The Gorosei speak to Sakazuki with extreme disregard. Why is it that they dubbed him the “red dog”, anyway?

“Kizaru”, the yellow monkey, is unpredictable and tricky, much like a monkey. “Aokiji”, the blue pheasant, is flighty and unfocused, like a pheasant. “Fujitora”, the wisteria (purple) tiger, is vicious but regal, like the tiger. And based on the single chapter in which we’ve seen Ryokugyu, the “green bull”, I would describe him as stubborn and quick to violence. I encourage you, then, to consider the most prominent trait of a dog – obedience. Sakazuki was chosen for his obedience, even in situations where he disagrees. He’s quite literally a whipped dog. 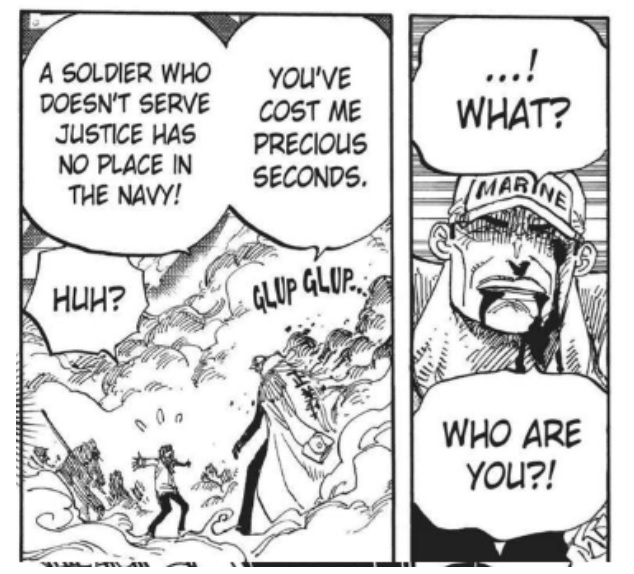 Now, in order to properly train a dog, its training should start very early, ideally as a child. I think the Navy (perhaps the Gorosei specifically) selected Sakazuki as a child to be trained as their lapdog, I think they killed his family to do it, and I think they blamed it on pirates so that he would have a lifelong hatred of them.

But why? Why that specific child for the role?

That brings me to part 3, where this theory gets really tin-foil-hat.

I think the magma-magma fruit is Uranus, the ancient weapon. This fruit contains untold powers of destruction just like the other two ancient weapons, but not only that: this fruit holds as well the power of creation. This ties into a few other major One Piece theories – that the One Piece and the All Blue are simply symbolic of the destruction of the Red Line at Mariejois and Reverse Mountain, unifying the world.

Some suspect that Pluton, the ancient battleship, will be the destructive force that accomplishes the goal of reunifying the seas, but if that comes to pass then I think it would be extremely anticlimactic for it to happen only on one side of the world at first. I believe all three weapons will be employed at once to forge the One Piece – Pluton destroying Mariejois / Fishman Island (fulfilling Shyarly’s prophecy), Poseidon dissolving the Calm Belt, and Uranus melting Reverse Mountain into the sea. 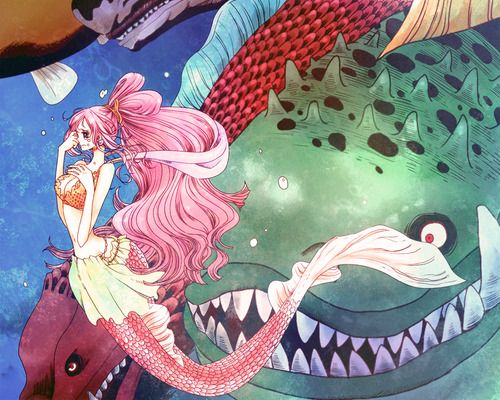 So let’s bring it all together.

Since the beginning of the series, Luffy has been learning and developing. This doesn’t just apply to his combat prowess – with Vivi’s guidance he has learned about the responsibility of leadership, with Zoro’s counsel he learned to command respect as a leader (a concept that was reinforced when he commanded Jinbe at the end of Whole Cake Island).

Now in Wano Luffy is getting his first taste of how to inspire forces (something that will be useful when the grand fleet returns). Even as a child, Luffy learned to suppress his anger because he admired Shanks so much – his and Zoro’s mistreatment on Jaya is perfectly paralleled to the beginning of the series.

I don’t think Luffy will be able to hold back his anger when he sees Sakazuki again, nor do I think Sakazuki will hold back. I think we’ll get the vengeance fight we’ve all been waiting for, but I think it will end differently than every other OP fight. Luffy will realize the destruction that the two of them are causing, and it will in some way harm the people around them.

Simultaneously, something about the circumstances of that fight will enlighten Sakazuki to the truth of what happened in his past, and he will have a change of heart. He knows of Luffy’s actions, the response to Dressrosa shows that, and so he’ll come to recognize that he doesn’t have to universally hate pirates. Just the truly evil ones.

The Reason Why Shanks Said Luffy Was A BET

One Piece | The Symbol of Shimotsuki Clan

The Fate of Boa Hancock After Dissolving Shichibukai System